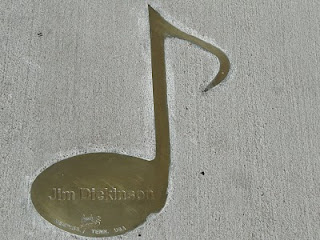 The Playground Team (Jim and Jill) took off on Saturday April 2nd and drove to Memphis to attend the unveiling ceremony of Jim Dickinson's Brass Note on Beale Street.

The ceremony was held on April 3rd in front of the New Daisy.

John Fry from Ardent studio opened remarks. His first was that Jim was the first independent record producer he had ever worked with. John and Jim were contemporaries and basically the same age, but it occurred to me that Dickinson was one of the first independent producers anywhere. John continued with well deserved endearing remarks.

Knox Phillips followed John. Channeling some of his Dad's revival spirit he told studio war stories of unique situations involving Dickinson sessions which included known felons in drag, Harleys playing to Gene Chrisman's beat on a Dan Penn track. firearms and mojo charms. We very much enjoyed Knox's genuine heartfelt presentation. There were other speakers including Congressman Steve Cohen, wife Mary Lindsay, sons Luther and Cody. All in all it was a moving ceremony and we were able to visit with many an old friend and compadre. We were spiritually uplifted. 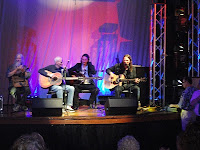 There was an impromptu jam session following the ceremony across the street at the Old Daisy. Jill and I played gigs and events with Jim and MudBoy and the Neutrons at both Daisys. Jim's 3 day 50th birthday celebration was at the New Daisy. 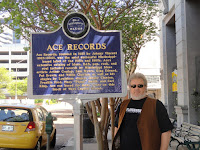 On the trip back to Playground, Jill made me stop in Jackson to visit the site of Ace Records where I grew some teeth in the record biz with Johnny Vincent back in the 70's. This is the Mississippi Blues Trail Marker that now stands in front of the old studio site. A special thanks to Jim O'Neal for including me on the sign.. I can send my grandchildren there sometime in the future

Lots of memories were remembered and experiences relived. A special thanks to the Turley's who hosted us in Memphis 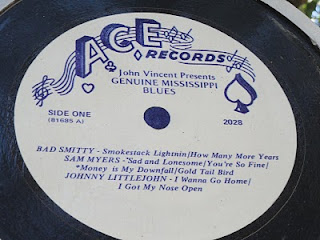 Photo from the Mississippi Blues Trail Marker of a record I recorded for Johnny.
Ace 2028 Genuine Mississippi Blues.. I believe they are still available for purchase
Chief
Posted by Playground Recording Studio at 6:39 AM No comments: