With Sabres In Our Hands 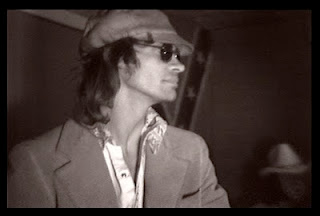 Excerpt from Robert Gordon to accompany the song
This was 1974, and the divergent forces in Memphis music came together that night at the post-Elvis studio built by the master around the corner from Sun. It was a session for Jerry McGill, whose Topcoats were the South Memphis hoods that East Memphis mamas were too scared to hire in the late 1950s. McGill's one released recording had been for Phillips some twenty-five years earlier. Jim Dickinson was producing the session, using demo money he'd wrangled from Warner Brothers. Those present included Danny Graflund, Campbell Kensinger, Marcia Hare, and another of the Mud Boy dancers. Impresario Jim Blake was there, as was writer Stanley Booth. Knox Phillips, Sam's elder son, was engineering the session.
Campbell sat in the control room drinking Wild Turkey from a fifth, bouncing the bottom of the glass bottle on the floor as he listened to other people tell stories. "You ever think of 'the Law' as a whole fucking table?" Campbell asked. And he picked up a coffee table, put the corner in his mouth, tried to bite it off.
Stanley Booth, who was practiced in the martial arts, leapt up and karate chopped a decorative wooden shingle into two pieces. Campbell was extremely unimpressed. Blake remembers Campbell saying, "These guys in my gang walk around with these guns and knives and shit and they think they're tough. I'll show you tough," and Campbell whipped his noonchuks from his back pocket and started hitting himself on the left side of the head. "About twenty times," says Blake, "stuff that would have not only disabled me or you, but would have given us permanent brain damage. And he said, 'Now that's tough.' Hey, nobody could disagree with that."
Knox and Dickinson, who was thinly slicing hog tranquilizer for sustenance, kept their attention on McGill, who was overdubbing the vocal. Knox remembers that he was singing "Desperados Waiting for a Train," but Dickinson believes it was a Civil War song called "With Sabres in My Hand." In the latter number, there is a line that upset McGill every time, a line at the end of the song in which the Southern narrator refers to "the lost cause." Dickinson leaned to Knox to confirm that he'd frisked McGill before the session.
"Yes," said Knox, "I got his gun."
"Gun?" said Dickinson. "Guns!"
At that moment, Eggleston was entering the studio floor with his video camera, and McGill's fuse lit. It was bad enough admitting defeat on audio tape, but to have it chronicled on video was too much. Eggleston crept closer as the song neared its climax. The camera was on top of McGill when he said the scurrilous words. The goddamn line sung, the final notes fading, McGill reached into his jacket and stated, "Lost cause my ass," unloading his six gun into the ceiling. Instinctively, everyone in the control room ducked. When Dickinson looked up, Knox was still at the board.
"What're you doing?" he hissed.
Stated the ace engineer, "The gun needs mo' echo."
Posted by Playground Recording Studio at 7:47 AM 1 comment: