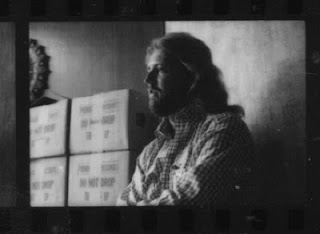 Ok..33 years ago, Jill and I are living at 100 North Main in Memphis... Lowenstein Towers 20th floor over looking the Mighty Mississippi.

Following the performance, Dickinson and I were talking to Herbie O'Mell. Herbie said that he had earlier heard from Joe Espsito at Graceland and Elvis had not come down from upstairs in 2 days or so and everyone was getting worried. We collect our fifty bucks or whatever and go on home. The following day is my birthday.. Jill and I are lounging around the apt.. I actually was on some pretty heavy pain meds at the time as Pat Rainer and I had been in a pretty serious auto accident over by the Pink Palace just a few days earlier.. so I had a big patch on my face where some glass had cut me during the accident.

Dickinson call up about 1:30pm and asks if we had heard the news. About 30 minutes later, while still on the phone the news flash came across the TV. Dickinson said he was headed into town. We all meet up at Phillips Recording... where the phone is ringing off the hook. Knox and Ricky were there. Robert Palmer calls at some point and says he'll be in Memphis in 3 hours. Robert, from the "Insect Trust" band had become a senior music writer at the NY Times 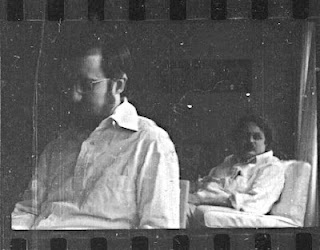 Palmer arrives a few hours later via taxi (which cost him a fortune as there were few taxis available and hotel rooms were really hard to get). I end up driving Robert to Graceland. It was a madhouse. The picture below is Palmer outside the gates of Graceland on this day 33 years ago. I also took photos at the funeral a few days later. If you'll remember, there were at least two Elvis fans hanging outside the gate that were killed by passing motorists. 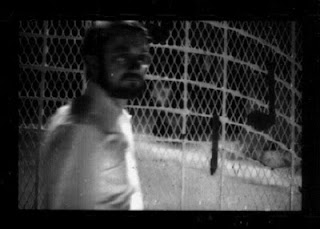 I thought it might be appropriate to publish these pictures, or let them escape on this day in 2010..
almost to the minute of when this saga began.

Other folks who showed up at Phillips during this 3 day period were Tav Falco, Charles Rateri, Randall Lyon, Pat Rainer and several of the Sun artists who had recorded concentrically with Elvis..

Finley Duncan and Shelby Singleton at Playground site in Valparaiso 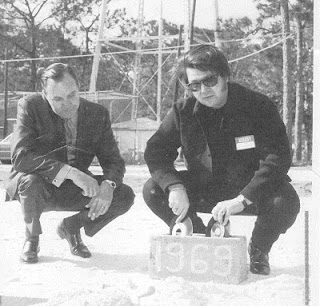 
So.. In Late 72 or so, on this same farm in Brentwood, I had a two track recording set-up. We had different musicians and songwriters in and out. It was adequate for song demos and the like. Jimmy Louis was a friend from Florida who ironically happened to record at Playground and had a record out on Shelby Singleton's Plantation label. He and his wife came to Nashville to visit us in a Lime Green 68 Caddy. Word got out that Shelby had a film projector and was going to have a showing of "Deep Throat" at his studio. (Gotta remember this was before VHS). So Louis and I attend the event and meet David Alan Coe, who was signed to Shelby also at the time but had cut his first LP down in Valparaiso which came out on Shelby's label called "Penitentiary Blues" that was co-produced by Teddy Paige.

Coe ends up coming back to the farm and staying 3 days.. we sang, wrote and recorded night and day for about 3 days.Within a month Coe had signed with Columbia and we went along as his backing band. The first album that he recorded for Colombia "The Mysterious Rhinestone Cowboy" was largely a result of the farm sessions. As Columbia, started promoting the Coe product.. we played gigs and did TV shows, even played the Ryman. However, we missed Memphis and would make regular trips on the weekend back to the Bluff City to hang with our rock and roll buds. Before Coe was signed to CBS he wrote for Pete Drake.. we did a lot of hangin out at Pete's Place on 17th Ave. There was a set of apartments across the street.,Dottie West had one, Linda Hargrove had one and McGill, for short time had 2. McGill would end up making alot of those weekend trips to Memphis with us. For a time perspective. this was during the time Eggelston was shooting "Stranded in Canton". As Coe started to gain recognition, different sidekicks, road managers etc. began to appear..

The Tucker Street Raid
The first manager made the mistake of giving me a ride from Nashville to Memphis in his little MG. We docked at Hal Newman's apt. behind Huey's on Madison Ave. Hal had a perpetual tab at Huey's and we could literally receive food and beer through the window.. Hal had a baby grand in the front room so there was always lots of songwriting and singing going on there. On the day of our arrival I stashed the road manager on Hal's sofa.. and we went about the task of making music in Memphis. Jerry was there speaking in rhyme. He had embodied the spirit of Confederate General Nathan Beauregard Forrest... he was toting around a homemade weapons bag that included swords, bows and arrows and knives, however every word he spoke was in rhyme. 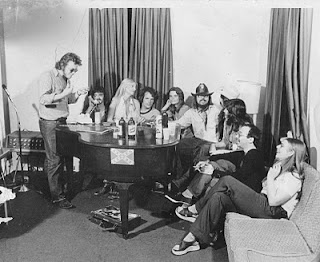 site of the Tucker Street Raid
Campbell Kinsinger was the king of Midtown. Nothing happened in midtown that wasn't truly sanctioned by him and his crew. We did a lot of strange and bizarre stuff in Midtown in the 70's.. most of which couldn't have occurred if Campbell hadn't been in control of the streets. Campbell is another story worthy of recognition. . 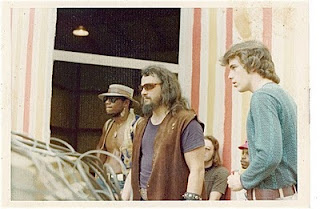 So the road manager is asleep on Hal's sofa.. Campbell drops by a couple of times and tells us all that no one should leave.. goodies were arriving at 10:00pm. The cast of characters at the time included McGill, Halito, Scary Sherry (who eventually married Bernard), Judy Avanzi, Celia Yancey could have been there, I can't remember and possibly Pat and Sabue and a couple of Midtown stragglers.

At 10:00 pm sharp.. simultaneously the front door and the back door are kicked in. Through the back door came one of Campbell's trained gals swinging nun-chuks better than Bruce Lee and Whitey, one of Campbell's lieutenants. led the charge through the front door with a nickel plated nine millimeter.. both entree's were followed by other members of Campbell's crew.. We hear someone holler "Secure" and Campbell enters through the front door. When I see McGill hit the floor and crawl under Hal's piano, I also deem this to be a good idea.. The road manager is still on the sofa. Campbell orders the guy to stand, which he did.. Campbell begins to interrogate the guy and then rips off the guy's tee shirt to inspect a tattoo he had on his arm. Seems like this tat was not one you would want to wear into Campbell's territory. The manager makes an explanation that he had received the tattoo from a cell mate in a northern prison and had no idea what it meant. (at this point it should be noted that Campbell was the undisputed leader of a regional Bike club.. and David Alan Coe and/or his supposed brother Buddha was the chief of a rival club).

Neatly tucked under the piano, we all are a bit nervous. Campbell then orders me to stand. I stood. He asks me "Lancaster, can you speak for this guy?' After a short amount of thought, the truth was "No". There are some situations where a one word reply is more than adequate, any other words would have been an excuse or a lie.

After a bit more interrogation and roughin' up, It is deemed that this guy is ok for now and everyone should get off the floor and this party should resume. Which it did. The music continued, everyone in the room, including the bikers sang a rousing version of "Why You Been Gone So Lone". Campbell insists we move the party to Peanuts.. which we do. While Furry is playing. Campbell's guys repeatedly started torturing this road manager and eventually kick his ass totally.. smashed his glasses and trashed his MG..I still don't know how he got out of Memphis. At one point during the melee, feeling as small amount of sympathy for the guy who had given me the ride, I ask McGill at the bar if there was anything we could do... he just smiled and shook his head...

Needless to say, our time with Coe had come an abrupt and interesting conclusion.. There was a phone conversation on my behalf between Campbell and Coe. As far as I know Coe never played in Memphis until after Campbell's death.. could have just been a coincidence.

Posted by Playground Recording Studio at 9:46 AM No comments: