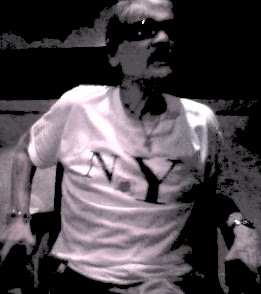 For those reading this soap opera who may not be familiar with McGill.. there are some things you should be made aware of. Jerry was friends with Waylon early.. long before the bigger records when Waylon was playing shows at the roadhouses in the American southwest. They were all buds with Duane Eddy who was Jessi Colter's first husband. In the mid 60's Waylon was just assembling the band that would eventually play on the "Honky Tonk Heroes and Me" album, which would be the first real breakaway album from the traditional Nashville method. On trips from the west coast to Nashville, McGill started bringing back turquoise and silver jewelry that he had acquired from his native American friends. Within a very short time every country music star in Nashville was wearing this type jewelry. Turquoise became a rage for a few years. McGill was singlehandedly responsible for this.

Jerry also acquired and was wearing leather clothes from the Indians before anyone else in Nashville. Country music didn't want leather clothes.. It didn't fit the mold in 1970. When Waylon put on leather clothes the "outlaw" movement became a reality.. or at least one that Nashville execs figured they had better package and promote like Wheaties. There were country music outlaws before the movement.. always had been.. just nobody called their names.

Now I can tell you this first hand... McGill has never compromised.. It's all or nothing, always has been. If you were to hang around Jerry.. you'll do more living in three hours than you would in your normal life in 3 years. Even now at 70 years old with diabetes and half a lung he can get more out of life than you can imagine.. It would make Keith Richards' eyes spin. 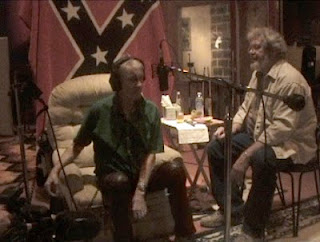 This is Jerry in May 2010 at Playground
Posted by Playground Recording Studio at 6:45 AM 2 comments:

So.. We're gonna back up a few years before we continue with the present.

When I first met McGill he wanted to kill me. I didn't know this until later. I was eighteen or nineteen and we were staying on a farm in Brentwood when Jerry shows up with a band of criminals... mostly car dealers, politicians and drug dealers that hung out in Printer's Alley. We won't mention any names to protect the not so innocent. When these guys arrived at the farm.. they had a full unopened bottle of quaaludes.. which we were supposed to keep safe until it was disposed of. There was also a shitload of little green mescaline pills.. The drugs were deposed, however not in the manner that they intended.. In a fog.. some incidents occurred after which McGill and I had an altercation.. Jill and I ended up chasing him from Brentwood all the way to Dan Penn's carriage house studio behind Ira Sachs' house.. Jill and I had a new '72 Monte Carlo.. we side swiped a couple of tractor trailer rigs on the high speed chase. At Dan's, after some tense moments (I had too much testosterone for my own good) Jerry and I resolved our differences.

A couple of days later Dickinson calls up .. He says "Jerry calls me a week ago and asks me if I know you, he says he's gonna Kill you, because your an arrogant bastard. The following week he calls and says I got this new kid Lancaster, who is going to lead my band".

One of the cons talked us into trading the bruised unpaid for Monte Carlo for a pristine '47 chevy, even trade... Everyone on music row had Cadillacs.. the bad boys.. Waylon and them had Lincolns... I had the '47.. Stanley and Bernard totaled this car on the Mississippi Arkansas bridge a year or so later. Stanley's book was still not out at the time

Geronimo in the Panhandle 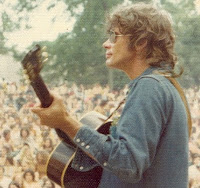 for our friends who don't know
Until 3 months ago.. I hadn't seen or heard from Jerry in over 35 years. Jerry surfaced in Huntsville and schedules a session in Memphis with Roland Jaynes at Phillips which included, much to Roland's dismay, more folks than antici...pated including all of the surviving members and compadres of MudBoy, Luther and Cody Dickinson..and two different films crews were in attendance. Robert Gordon and Paul Duane had been in the process of filming a documentary film on Jerry. Up until then the only way I knew he was still alive was a random post on Facebook. Within 2 weeks of the Phillips sessions.. McGill had hired a taxi to bring him down here to Valparaiso from Huntsville with all his earthly possessions as well as several other folks' possessions. We put him up at Ed Kollis' house, a couple of blocks from the studio. At this time he had already been diagnosed with lung cancer, not to mention he was in advanced stages of diabetes.. A day and a half later after a long arduous flight through volcanic ash to Huntsville, Irishman Paul Duane arrives in the same taxi with film gear in tow. It only cost $750 for the taxi ride..more later

McGill arrived first. It took them almost 20 hours to make the drive from Huntsville.. 1st there was a flat tire with no spare somewhere south of Cullman. While the taxi driver (who McGill had designated as his road manager) went looking for a tire.. Jerry was serenading on the interstate. Hiway patrols were in attendance.. after a 4 hour tire.. they got to south Alabama and had no money for fuel... there was a wait for money to be wired from the company filming the documentary.. They arrive on a Friday afternoon.
Unloading Jerry's possessions.. there was a broken plaster Elvis statue, along with a plaster angel.. a legal sawed off shotgun.. bags of medications.. and some other various folk crafted weapons.. some items that turned out to be "borrowed" and a few clothes.

We locked Jerry away in Ed's house for the night. The following day, April 24th was Saturday in the Park family day, which takes place in front of the studio and is an all day event. We are always involved with the audio portion of the event and were that day. While we were working the event McGill escapes Ed's house and begins to walk towards the sound of music. At the sight of Jerry the neighbors immediately call the police. Jerry ends up arriving at the event via female police escort. She was a big gal, goes to the passenger side of the cruiser and physically lifts McGill out of the police car, while playing "Working Girl" on the guitar and sets him on the street in front of the studio... more later

So... Saturday in the Park.. is a local festival with some family and historical oriented vendors and booths, all accompanied by school and church musical ensembles playing live. McGill goes around to each booth and does impromptu performances and gathers small crowds at each. There is a historical museum next to the studio which he visited and performed in... all the while secretly trying to score. Needless to say he was the surprise special guest of the day. We fed him and relocked him in Ed's house on Saturday night. The same evening he woke and decided to go fishing on the pier across the street. The police were again called by someone who was accusing him of being a child molester because he had asked a kid if he wanted to go fishing. Again, he talks his way out of the police situation..Sunday morning on the walk to the studio he passes a church, takes out his guitar and begins to serenade some of the parishioners. VOLCANIC ASH over Ireland keep Paul from flying out.. He arrives with camera in tow on Monday which is Jerry's vocal overdub day. By this time McGill had converted Ed's house into a fortress and had weapons, mainly shivs, stashed in every available crevice. Meanwhile Elvis' head is still broken off the statue and he's shooting insulin through his clothes. By overdub day.. he had not slept nor stopped talking.. so his voice was shot for singing.. which really didn't matter.. what did matter was how I was going to get them outta here. Jill and I resolve ourselves to driving both Paul and Jerry to Huntsville.. We did this on Tuesday.. of course after stuffing himself on herbalite smelling dog tranquilizers we couldn't find Joyce's house and she wasn't answering the telephone.. all Jerry said was "Uh Oh.. wrong rocket" Jerry was supposed to go have a lung removal operation under yet a different alias in less than 2 days. Joyce was in the shower so we placed all of his belongings on the porch and left him with Paul and Joyce.

A couple of harrowing weeks later, while shooting a crossbow. he chopped off a finger on his fretting hand.. he had a gig scheduled for the weekend. When he calls with the news of the accident I tell him how to tune his guitar in open D and play with a slide.. he was thrilled.. however the morning of the gig bounty hunters from Cullman show up and arrest him under a different alias... still hadn't had his scheduled operation... so all of his meds were in sacks not prescription bottles and they don't exactly let sacks of drugs into the prison. So with the pain from the recently departed finger.. he screamed for a couple of days. This being a weekend there were no judges available and as it turns out the following Monday is a state holiday in Alabama.. ironically Jefferson Davis' birthday..the courthouse in Cullman is closed all week